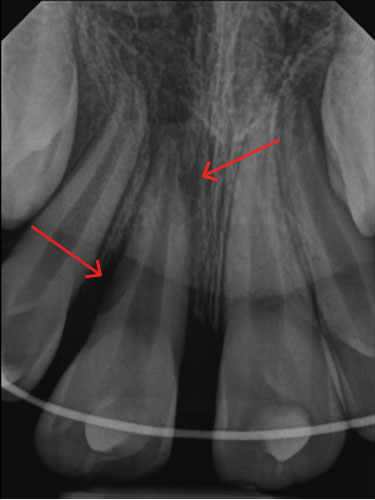 I have a story to share with you about a young boy who knocked out (avulsed) his front tooth when playing with a friend. When the tooth injury happened his mom was frantic and couldn’t find a dentist who could help them immediately.

Her dentist reimplanted the tooth and then splinted it in place using an NiTi orthodontic wire. They then monitored the tooth injury for some time “to see if the tooth would heal on its own.”

I’m very sensitive when it comes to child patients, because I feel like teeth are such an important part of making someone who they are. I can’t imagine living without my front tooth growing up; it would’ve had such a huge impact on my self-esteem.

This case got me pretty fired up when I met this boy! I feel like several pieces of his case were mismanaged, and I really had to bite my tongue.

I thought to myself, If that dentist didn’t know the trauma guidelines, then chances are, others don’t know them, either. This is an important case to share because I think dentists and the general public alike can learn many lessons here. My hope is we can save children’s teeth from this blog post!

My brave patient is still in treatment, so stay tuned to the blog for an update when all is said and done. We don’t know what the outcome will be just yet, but we are hopeful that we can save this tooth injury!